The Journey: runner turned triathlete.
Jacqui was born to marathon-running parents and began running at age 5 in an attempt to beat her 4-year-old brother, Nic, in the Brookfield Zoo Goody-Bag Gallup (a 1/2 mile race back in the day where "runners" ran through stations at the zoo and filled up their bag with all sorts of fun kid stuff). That race plus the fact that her parents could travel around the U.S. to run races hooked her early on.

After a successful high school cross country and track career, Jacqui went on to attempt to run in college. 2 stress fractures (plus one near break) and multiple stress reactions led her to "retire" during her Junior year. Now that she had free time (collegiate athletes spend about 20 hours per week training), Jacqui decided to run the 2007 Chicago Marathon. A slight Achilles issue led her to the helpful hands of her now-husband, Ryan. Ryan incorporated biking and swimming into Jacqui's weekly workouts during her Achilles issue and the built-up endurance helped her complete the marathon (despite it being cancelled due to the heat).

Ryan began coaching Jacqui in marathons, still incorporating biking and swimming into her training so as to prevent any more stress fractures/reactions. After breaking the 3-hour marathon mark at Chicago 2009, Ryan had Jacqui test out her swimming and biking skills in the 2010 Buffalo Springs Lake 70.3. At the time, this triathlon was a qualifier for the Ironman World Championships (held in Kona). In her first real triathlon, Jacqui missed qualifying for Kona by 9 seconds. Though this was a fun and exciting experience, it would be another few years before Jacqui committed to triathlon training for good.

Jacqui ran a few marathons during this time period. Her marathon goal was to qualify for the 2012 Olympic Trials (2:46:00 or under). In her attempt to do so at the 2011 Milwaukee Marathon, Jacqui partially tore her right hamstring, ending her attempts at an OTQ.

On October 13, 2012, Jacqui and Ryan were married. While naturally posting this news on Facebook, Ryan noticed it was also the Ironman World Championships and told Jacqui they should go to Hawaii for their one-year anniversary. Ryan meant as Kona qualifiers, Jacqui meant as a vacation... but her competitive side caused her to go along with Ryan's idea. Due to her full-time job (teaching), Jacqui told Ryan she could only commit to training for a 70.3. As luck would have it, Eagleman 70.3 (at the time, one of three 70.3 Kona qualifiers) would occur the weekend that Jacqui's school ended. Training together for the 70.3 was an amazing experience, and both Jacqui and Ryan won their age groups at Eagleman, claiming their Kona slots as a one-year anniversary present.

In her first attempt at an Ironman (Kona 2013), Jacqui placed 13th in her age group in 10:20:04. Less than 5 minutes after crossing the finish line, she was convincing Ryan to sign up for another Ironman to come back and compete in Kona 2014.

Ryan and Jacqui competed in Ironman Los Cabos in March 2014 and were again fortunate enough to both qualify for Kona. With a 3:10 marathon split at the end, Jacqui realized (with the help of a few people!) that her run was pretty strong and was convinced to sign up for an open marathon. With 12 days until the 2014 Grandma's Marathon, Jacqui suffered a deep bone bruise on her knee, ending any attempt at running the marathon. Jacqui switched back to triathlon training to prepare for Kona 2014.

Kona 2014 did not go quite as Jacqui had planned (with the exception of her run), so she and Ryan signed up for Ironman Cozumel in hopes of qualifying for the 2015 Ironman World Championships. Again, both got lucky in Mexico and qualified for Kona Round 3.

With her 3:03 marathon at the end of Ironman Cozumel, Jacqui decided to hop back on the "run" train and get serious about training to run a sub-2:43 (Olympic Trials Qualifier).

After months of hard run-focused training, in March of 2015, Jacqui's knee began to experience severe pain: this coming from the girl who ran through multiple stress fractures. Confirmation from physical therapists told Jacqui the worst: the marathon dream would have to be put on hold once again as patella tendinitis was the diagnosis.

While upset by this news, Jacqui took this as a sign to get back on the back and get back in the pool and begin to seriously train for Kona 2015. With the support and encouragement from friends and family (and even students!), Jacqui is determined to reach her biggest goal yet: an umeke bowl at Kona. 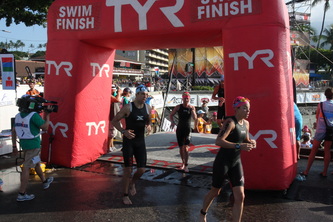 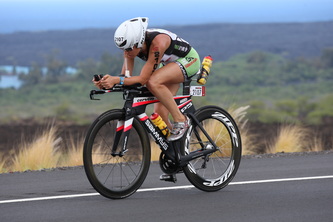 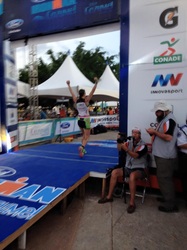